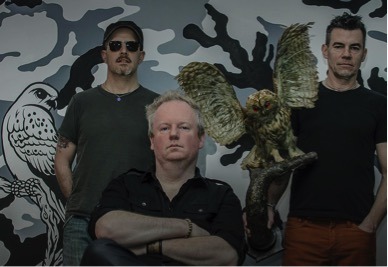 In an era of television music idols, internet video sensations and interchangeable indie bands that are about as edgy as a pair of mom jeans, Lost Romance harkens back to an earlier, simpler time. With a plug in and play brash rock sound that is just as home with the likes of The Replacements, Husker Du and The Lemonheads as it does with Nirvana, Buffalo Tom and fellow New Brunswick, NJ natives The Smithereens and The Gaslight Anthem.

Since late 2011, LR have made a name for themselves throughout the North East as a live act to be reckoned with. Averaging close to 100 tour dates a year, the band has been winning over fans from Maine all the way to Florida with raw, honest rock n’ roll. They have shared digital space on comps with Real Estate, The Front Bottoms, Nicole Atkins, La Sera and have shared stages with Rye Coalition, TAB the Band, Elliot Easton (The Cars), Clem Burke (Blondie) to name a few. In addition they have also been nominated for several Hoboken Music Awards including Outstanding Male Solo and E.P. of the year.

In 2013, LR signed with Los Angeles based independent label, Starving Dog Records and released their debut E.P. “The Light And The Dark”. A mix of power pop, raging guitars and strong melodies, it gained ground in the press, social media and on radio including WDHA 105.5FM, one of the biggest rock stations in New Jersey. The band toured heavily throughout 2013 into 2014 in support of the album culminating in a 10 city East Coast tour in October 2014. The tour kicked off with Lost Romance being chosen as one of only a handful of bands to play ReverbNation’s showcase at the CBGB Festival 2014 in NYC and ended up taking the band as far south as Florida.

2014 also saw the recording of Lost Romance’s first full length album. Going back to basics, the new tracks were recorded at LR bassist Dan Haag’s (The Astrojet, Benzos, Jody Porter & The Black Swans) basement studio on four track cassette. With drums and guitars recorded live with no overdubs to tape, there was no room for error. The guys locked in solid for these intense and sweaty recording sessions during the summer to make for a truly authentic vibe.

2015 started with Lost Romance playing Light Of Day Benefit in Asbury Park, NJ for the third year in a row alongside such luminaries as Suzanne Vega, Johnny Rzeznik (Goo Goo Dolls), Willie Nile, John Eddie and the Boss himself, Bruce Springsteen. Lost Romance’s Gerry Perlinski was asked by the charity to curate a Spotify playlist to help promote the yearly event. They also opened for Pat Dinizio (The Smithereens), plus rock supergroup The Empty Hearts featuring members of The Cars, Blondie and The Romantics. 2016 will see the release of their new full length album along with major touring throughout the East Coast and Mid-West.