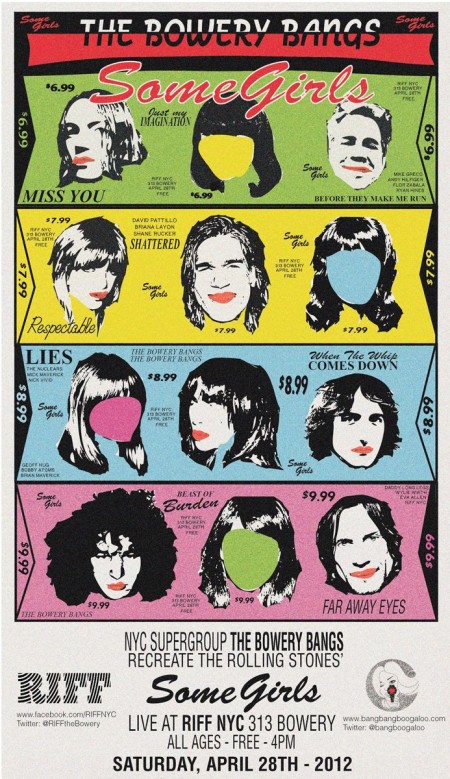 THIS IS A SATURDAY MATINEE AT RIFF!!!
THEN MAGIC MONDAY APRIL 30 at TAMMANY HALL.
FREE SHOWS!!!!

Bang Bang Boogaloo, Andrew Charles, and Ky Digregorio present the NYC supergroup The Bowery Bangs performing The Rolling Stones “Some Girls” album at RIFF on the Bowery in NYC. Featuring members of The Dead Exs, Daddy Long Legs, The Madison Square Gardeners, Enemies!, Prospector, The Zabalas, The Dirty Glamour, Briana Layon & The Boys, The Colored Boys, Lost Romance, and backed by the amazing Nuclears with Daddy Long Legs on harp.

This is gonna be a killer lineup playing a killer record. Lets do it! FACEBOOK INVITE

Some Girls is the 14th British and 16th American studio album by The Rolling Stones, released in 1978 on Rolling Stones Records. It peaked at #1 on the Billboard 200, and became one of the band’s biggest-selling albums in the United States, and has been certified by the RIAA as having six million copies sold as of 2000.

Then we are gonna take it to MAGIC MONDAY APRIL 30!